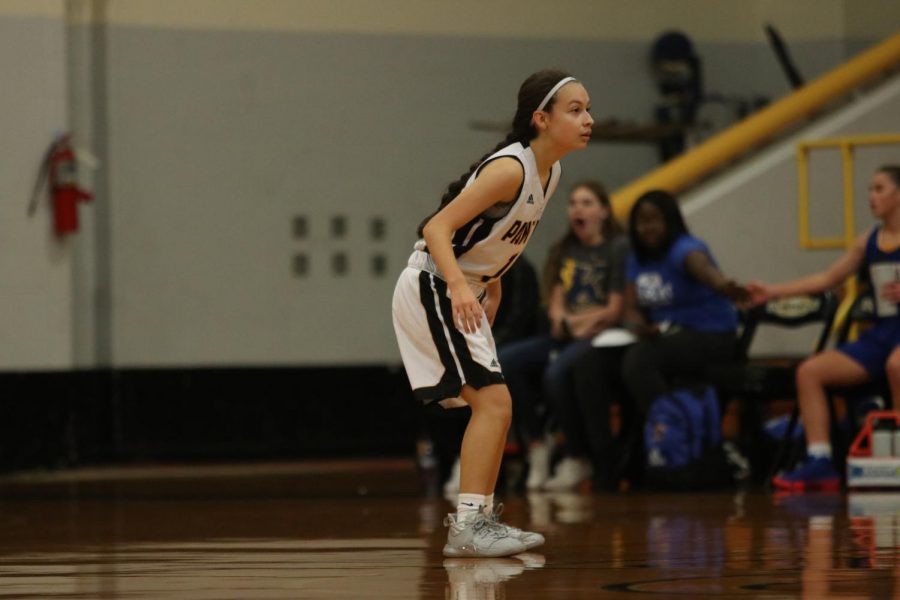 Freshman team point guard Alejandra Ramon remains in a defensive stance as she prepares to take on the opponent pressing the basket.

Entering freshman year, the environment is new for all. A new school, new faces, and for some, new standards to play by.

For basketball freshman girls, putting on the notable Klein Oak jersey was a new experience.

“Moving to the high school level was a lot harder than I thought. The girls are bigger, stronger, and know the game better than the middle school competition, which made me work even harder to be on the same level as them,” freshman team point guard Alejandra Ramon said.

In addition to dealing with the added intimidation of high school, Maggie Green is only one of two freshmen to be moved up to the varsity team. To add to the mix, playoffs are right around the corner.

“I think it’s a very good experience and that it makes me want to work harder to be on their level,” Green said.

When there is so much time and effort put into a passion, it is almost inevitable to not encounter some moments on which to look back.

“My favorite moment is when we beat Oak Ridge Varsity,” Green said. “Oak Ridge was undefeated, and they are one of the best teams in our district. I liked that game because we really worked as a team and started off with a bang and won the game.”

While for others, winning in general brings an abundance of excitement.

However, the season isn’t ready to wrap up just yet. These Lady Panthers are always seeking improvements to be implemented into their game next year.

“One improvement I would like to bring next season is increasing my free throw percentage and overall taking more shots,” Ramon said

“I’m going to work on communicating with my team on the court better,” Baumel said.

After a successful season from all three teams and as the varsity prepares for playoffs, the regular season is set to end against Klein Cain on Feb. 11.