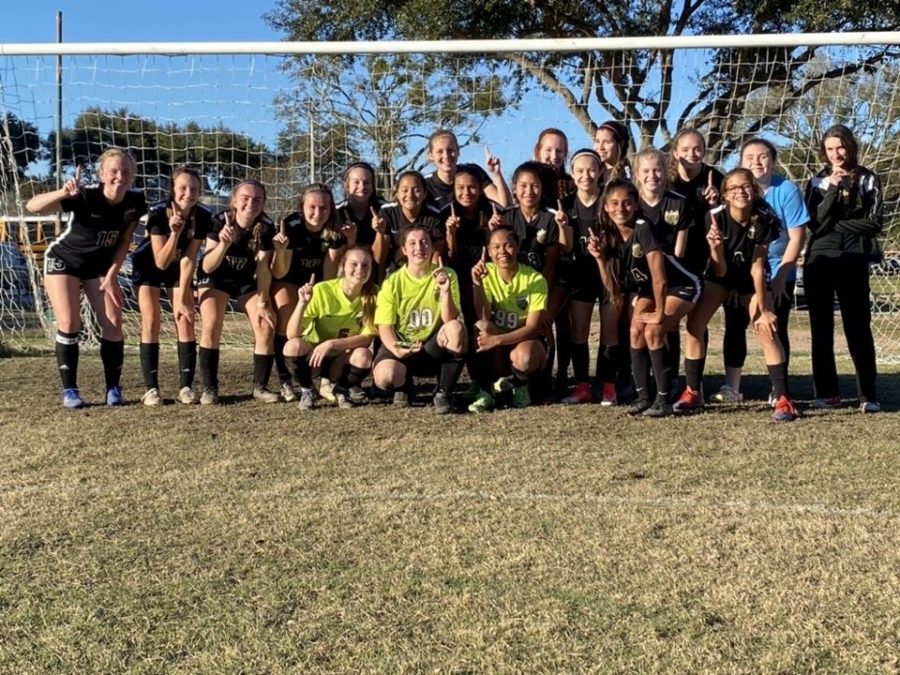 Continuing the Klein Oak tradition of excellence on the soccer field, the girls’ junior varsity soccer team put on a show this preseason with an impressive performance in the Waller Varsity Classic tournament where they took home the first place trophy.

The team members said beating several area varsity teams gives them the confidence needed in the preseason to face the tough competition they will face during district play.

The Panthers began the weekend with a convincing victory over Cameron Yoe High School with a dominating performance winning 6-0. Oak followed up the win the next day with another successful game against Needville High School with an outcome of 3-0. The win can be credited to a sensational hat-trick by junior Kaitlyn Menard.

“It was a great game and we played well together to get the win,” Menard said. “Going into the game, we knew it was really important for us to give everything we had so we could go to the semifinals.”

The Black and Gold continued winning with another win over Needville, this time with a score-line of 1-0.

Heading into the championship, the girls faced an impressive Fulshear Chargers team that held their own throughout the regulation time, forcing the game to go into penalty kicks. The Oak girls had an outstanding show of power scoring four out of five of their kicks. But, the defensive side of Oak was the deciding factor that won the game, and tournament for the girls thanks to sophomore goalie Sophie Pettus, who stopped the Chargers from keeping up with the Panther girls with a final score of 4-1.

“This team had always been fighting hard since I first started playing with them. It was an incredibly hard fought and physical game and I give a lot of credit to everyone, especially the defense. Because of the strength and determination of the team, we came out of that tournament in 1st place,”  Pettus said.

The JV first regular season game will be a home game against rival Klein High School on Feb. 18.