Panthers set to take on MacArthur for first round 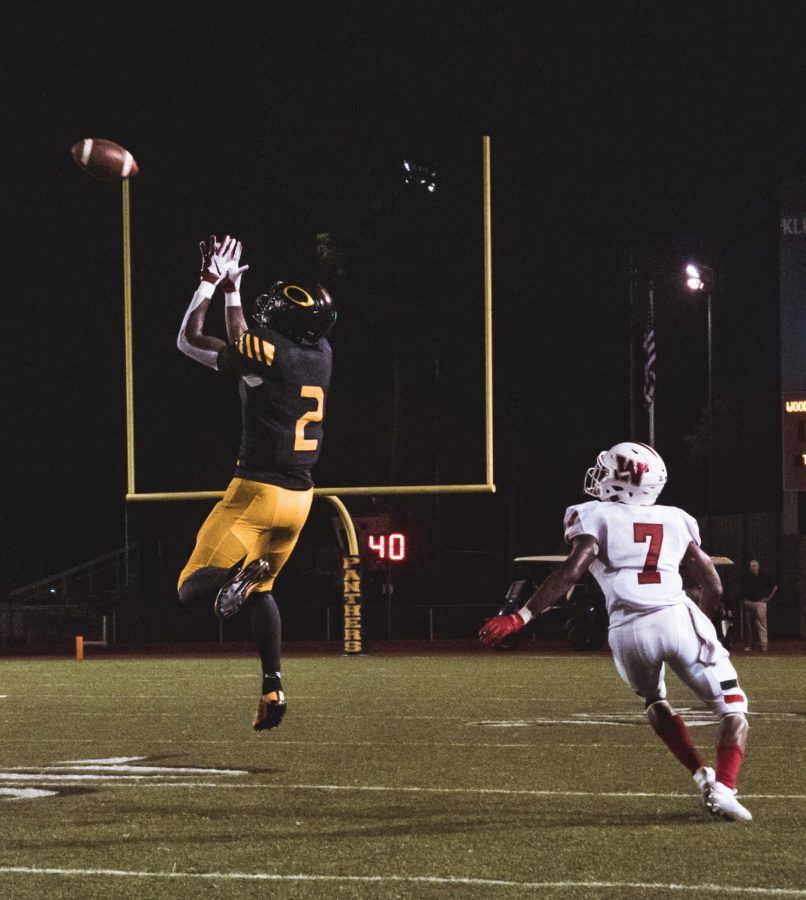 Leaping up to catch the ball before the Woodlands middle linebacker Blane Corekin can make a play, senior Dwight McGlothern snags the ball for a first down. The Panthers plan to overpower the Generals defense tomorrow as they did in other games throughout the season to bring home a first round playoff win. According to MaxPreps, McGlothern is on record for 1085 yards so far this season with help from the arm of quarterback Montrell Bolton and the beefy Panther O-Line.

It’s that time again, playoff time, arguably the most exciting yet nail-biting experience for every Panther fan.

Oak football is heading into the playoffs with their heads held high-in-the-sky despite an unexpected loss to the Klein Cain Hurricanes. Finishing the regular season with an 8-2 record.

The Black and Gold for the first round of the playoffs will face off against Aldine MacArthur Generals who finished this regular season 5-5.

Once again, Oak is favored statistically, but last week against Cain the Panthers were also chosen to win, and didn’t. So, this is football so Oak has to keep in mind anything can happen.

Moving into specifics, on the offensive side of the ball, Oak needs to see the offensive line step it up. MacArthur’s defensive line is big and the Panthers will need to rely on experienced linemen like Blaine Birner and company to carry the weight. Also, Oak cannot continue to have quarterback Montrell Bolton scrambling in the first two seconds after the snap and expect him to come up with a play every time without the backing of the entire line.

On the other side of the ball, the Panthers defensive backs need to move on from last week’s loss, and be sure to stop deep throws that they couldn’t stop against Cain’s quarterback.

Something that can be forgotten by the ordinary fan but is just as important as offense and defense is special teams. For extra points and field goals, the linemen have to rally together to give the kicker more time and room to make sure the kick has the best chance of making it through the uprights. Then the kicker has to do what he’s trained all year to do: perform under the clutch situations.

In all, every position on the field plays an important role in the success of the team. Everything hinges on the drive, desire and determination of the team. The family. It’s playoff time and the stakes have never been higher. Everybody who’s out on the field needs to play at 110% if they want to make a run deep into the playoffs.

The coaching staff and the players have spent this last week working on fine tuning their strengths and there’s really no better time to implement them than right now. The Panthers need to enter the field strong and keep the energy and momentum throughout the entire game if they want to have a shot at week two of playoffs.

Fortunately, the MacArthur Generals have had a less than stellar year and barely squeaked into the playoff with a record of 5-5, but that type of team seems to be the one that gives the Panthers the most trouble.

Oak just has to play their game and stick to their usual plan to avoid beating themselves.

Overall, the Oak offense will face huge mountains tomorrow as the Aldine School District is known for finding big players and teaching them how to hit. And MacArthur is no exception. Their defensive line averages 280 pounds, which puts even more pressure on the Panthers offensive line to have a top-tier performance.

In order to win tomorrow, the Panthers need to focus on getting the small things right if they want a ‘W’ against MacArthur. The Generals are short of the toughest competition Oak has faced this year, but the last thing Oak needs to do is take every play lightly. By every player on the field doing their job to the best of their abilities, a win would surely be in sight for the boys in black and gold.