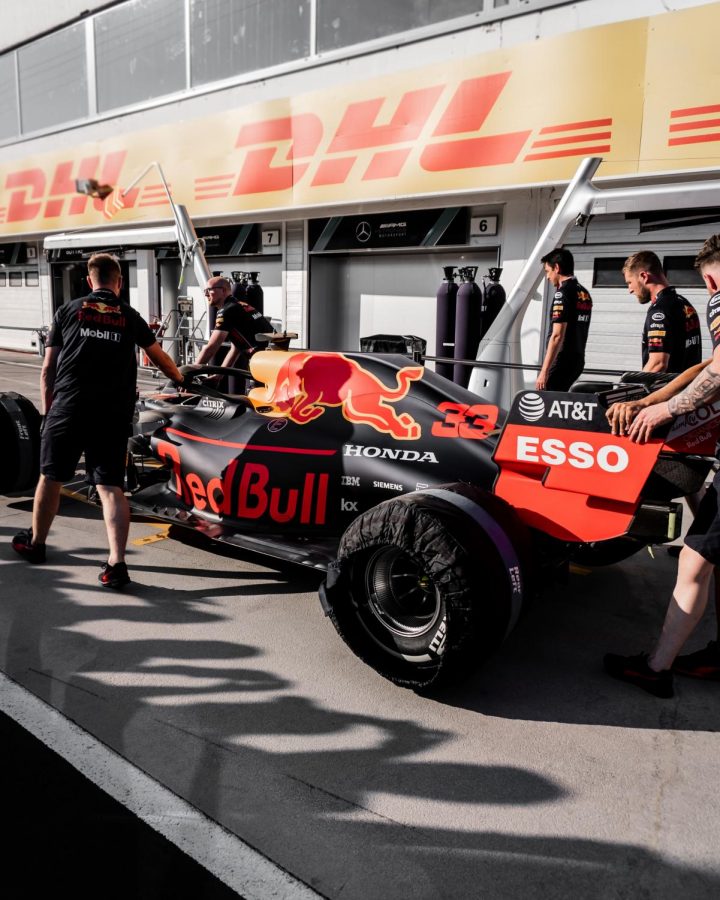 The cockpit crew prepares to work on the fan favorite Red Bull car. The Formula 1 World Championship races occur in different cities across the globe between March and December.

Twenty racers, 10 teams, one lineup on the grid as they anxiously wait for the green light to start the race. With the only taste of Formula 1 this year being at pre-season testing, there is a lot of anticipation for the upcoming season. At times there were worries that there wouldn’t even be a season this year, but now with the possibility of things such as double race weekends, fans are excited for the season.

“Every year I look forward to the new season with new drivers and new cars,” junior Alex Lopez said. “It is always great to see the buildup to the first race and watching the first race happen to cheer for my favorite team to do well.”

With the first race in the books April 18, many fans think there is a lot to look forward to after F1 racing powerhouse Lewis Hamilton in the AMG Mercedes car won in a battle with his rival Max Verstappen in the Red Bull car. Observers believe these two racers look like they are going to be in a close battle throughout the whole season.

These two teams are the likely candidates for winning the Constructor’s Championship meaning they score the most points based on how high up they finish in races. Hamilton and Verstappen are looking to come on top in points this season. They are considered the two best racers in the world and wish to prove it by winning this year.

“I love the look of the Mercedes cars but I have always been a fan of Red Bull and think they have a great chance of winning this year,” sophomore Nathaniel Stovall said. “They are a very good team who has been on the rise, and I can’t wait to see them hopefully come out on top.”

For many Americans, their chance to see the race might be able to happen in Austin, Texas Oct. 24, 2021. A lot will have happened by then, and there might be more indications as to who might win. Mercedes have historically come out on top for this race, but this could be a crucial race for Red Bull and Max Verstappen as a win here could propel the team closer to victory.

“I have been to a race in Austin and it was one of the coolest things I’ve seen,” freshman Elizabeth Lobrecht said. “Seeing them go over 200 MPH is insane. The competition is crazy. I would love to see them again and see them battle it out once again as last year it was canceled.”

Fans believe in what looks to be a great season ahead with both racers and think there is a lot to look forward to. Spectators wait with a lot of anticipation to see if Lewis Hamilton will once again win another title or if Max Verstappen will finally be able to dethrone him and win his first title, giving Red bull the Constructors Championship that Mercedes has held for years.