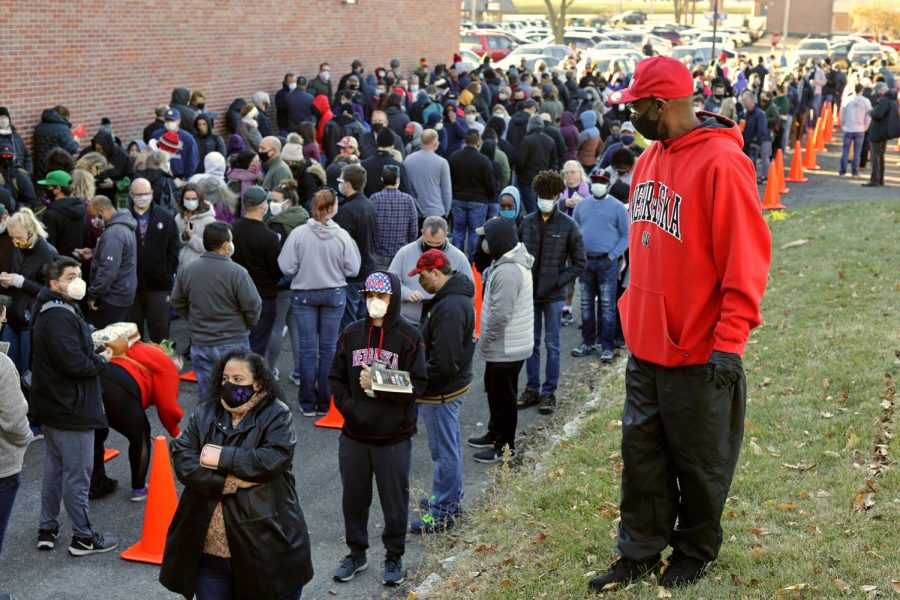 Voters across the country pack the polls before election day including 18-year-olds who look forward to casting their first votes.

A highly anticipated event: the presidential election. It’s the day that many around the world have been anticipating since the beginning of the 2020 presidential campaigns.

“This election is a complete train wreck,” junior Reem Numan said. “I read one tweet that sums up my opinions perfectly.  ‘I feel like Trump and Biden are two divorced parents fighting over custody of us but we kinda just wanna go live with grandma.’”

Campaigns and advertisements in places like social media, the television, and the radio have been predominantly focused on encouraging Americans to vote in this election. The impact of such campaigns can be seen by the high rates of voters.

“When I heard of this election year having one of the biggest voter turnouts since 1908, I was very surprised to see how many people made use of their voice and vote,” sophomore Hannah Pescador said.

When voters participate in the democratic process, there are a number of things they consider when electing a candidate. A major point in voter’s minds this year has been Coronavirus and its impact on the country.

“I view the Coronavirus as a test of Trump’s leadership,” Pescador said. “Seeing how he lied to the American people instead of telling them the truth by letting them know how dangerous this virus truly is, his four-month late response after being told about this virus in November, and this country going into the highest unemployment rate since the Great Recession. This tells us a lot about his ability to lead a country during a crisis.”

As people analyze policies promised by each candidate, opinions vary as people decide to ponder the promises and policies of the candidates.

“Trump says a lot of dumb things, but the things that he’s done have been good. Biden talks a lot, but hasn’t fulfilled many of the things he’s promised,” junior Lauren Collins said. “Covid has put Trump in a more negative light, even though there was little he, or any one person could do about it.”

While not many students are able to vote, they have the ability to voice their opinions on the election and advocate for policies that benefit the whole of the country.

“I don’t agree with everything Trump says or does, but I do agree with many of the policies that he has and many of the actions he has taken while being a president,” junior Tyler Jackson said. “He has gotten things done and kept promises. Biden hasn’t always had a good history while in congress, him and Harris have also been back and forth in what they support and don’t.”

Students are very aware of the state of politics in the country, and some are able to participate in the political processes of the country by voting, like senior Ashelyn Phelan.

“Neither candidate is clean of flaws, but Joe Biden has real empathy and love in his heart,” Phelan said. “We need a human in office who will care about our future generations and those who are about to enter the workforce, rather than those who have been working for decades. Both candidates have policies that terrify me, and both candidates have policies that I very much agree with. I am not confident in either of them to be the best president we have ever had, but I think Biden can bring the country to a place it has never been before, in a positive way.”

The Democrats and Republicans are both pushing hard for their candidate to win, and many can see pressure building as the election day draws near. But opinions on the effects of election vary.

“It has been one of the most chaotic elections I have ever seen or heard of,” junior Matthew Latimer said. “I feel like both candidates bring little opportunity to the table; they make me feel like this country is going down a path that it shouldn’t have.”

But these two candidates are not the only one running in the election; there are some who explore the option of third party candidates.

“I would vote for someone else,” sophomore Gabriela Rios said. “They are both not fit enough to lead our country. They make me feel worse about the country. They are just too stubborn and stuck in their ways to adjust to what the people really need.”

There are many opposing opinions on the candidates, and on the current state of the country. But despite the contention, many students seek to have their opinions heard, and can see many engage in the political sphere.

“The upcoming election is important; it will determine the path our country will follow,” junior Joshua Martinez said.