In first season, XFL emerges as exciting alternative to NFL but files for bankruptcy 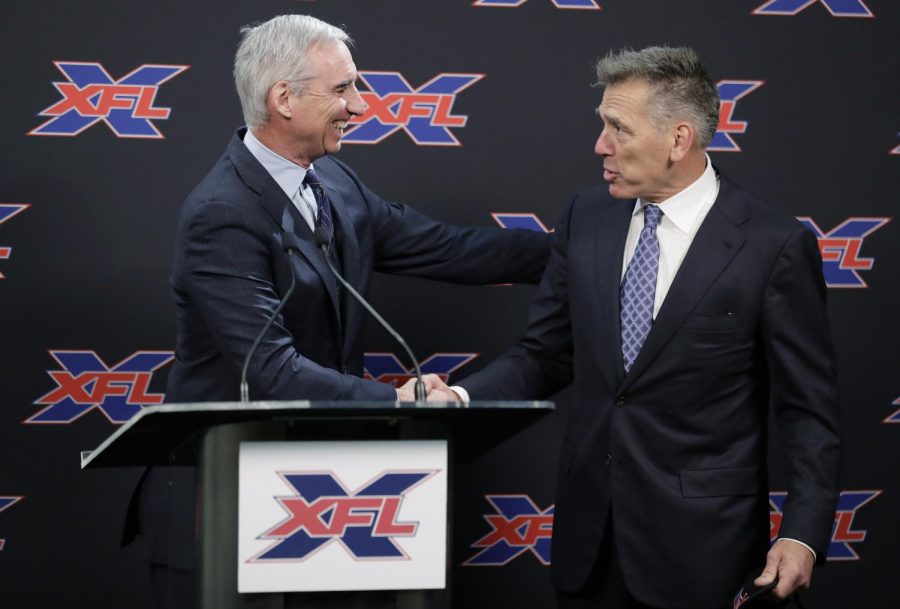 XFL Commissioner Oliver Luck and Seattle Dragons Head Coach Jim Zorn meet to discuss Zorn's introduction into the league. Before the pandemic, football fans flocked to games of the new league, enticed by cheap ticket prices and non-stop action on the field.

It was another sad day in U.S. sports this past week when the emerging fan-favored XFL was killed by the novel coronavirus.

Coming on strong this spring was the XFL, but the season was abruptly halted despite its gaining popularity as COVID-19 started rearing its ugly head in the U.S.

The XFL, a new league that presented itself as a hard mouth and intimidating style of football, filed bankruptcy after being unable to fulfill it’s financial commitments because of the virus. The players were able to be paid for their entire contracts, but after that, the team coaches and stadiums in which they played could not be paid. Bankruptcy was the only option.

Disappointed fans said the league brought new-found excitement to everyday football that the National Football League had not provided that in awhile. And the nation was beginning to pay attention. So why was the XFL getting so much attention?

To be specific, the different rules of the league gave the XFL an advantage over the NFL. The rules of the XFL were much more violent and savage. In addition, fans got a more inclusive experience as inflatable volleyballs and stand vs. stand noise competitions covered much of the game.

“I went to the first Houston Roughnecks game at the Sam Houston Stadium downtown,” junior Kailey Sledge said. “The atmosphere was really fun and welcoming. The whole crowd started the wave and sent a beach ball through the stadium.”

To elaborate, on kickoffs, the return team and kickoff team were stationed five yards away from each other, giving players less time to prepare themselves for a hit. This style reverted back to the old days of the NFL, something every fan hasn’t seen for a long time.

And the leadership of the XFL took advantage of this by promoting the league to have fewer rules than the NFL, which in turn, encouraged rougher play.

Also, league owner Vince McMahon timed the beginning of the season nearly perfectly with the ending of the college and NFL seasons, giving all those fans more football to watch.

For example, the excitement during the Superbowl is unmatched compared to the rest of the season. So, when the Superbowl ends, the realization of many that football is over for some time sets in. And this is where the XFL began to play its part, but it was also when COVID-19 made a surge in the U.S.

Fans of the NFL were excited to have a league to watch during the NFL offseason, opening doors for the new league to reach every possible football fan.

Finally, the XFL changed up the scoring patterns of the league to offer a more interesting and dynamic form of football rather than the touchdown followed with an extra point.

The rule changes came after league owners wanted more exhilarating play rather than the generic and rather boring style the NFL has.

For instance, the extra point could be discarded completely for a scrimmage play with various amounts of point value depending on where the offense chose to take the snap from the goal-line. This provided something more nail-biting and thrilling.

And it seemed to be working. Fans across the country voiced their opinions on the matter and nearly everything was positive.

However, the league did have its downsides. For instance, the league only spanned 10 weeks, which is six weeks less than the NFL.

Coupled with the number of teams coming in at an unimpressive eight, the competition wasn’t as interesting or vigorous. And the public was visibly aware of this. Some predicted the end before it began, even without a pandemic.

“I don’t believe the XFL will succeed mainly because the only reason I think its popular right now is because of the newness of the league. Eventually, it will die off,” junior Gabe Alpar said.

Also, many people were forgetting that the XFL was also introduced  in 2001, and it only lasted one season.

Many reasons contributed to the fall 19 years earlier, but mostly because the fans never took the league as seriously as the NFL. As Dwayne “The Rock” Johnson and fellow WWE wrestlers, Jim Ross and Jerry Lawler joined, fans began to lose interest as they saw the league as the WWE of the football sphere.

One positive for fans, several key players were “discovered” through their play in the XFL and received offers from NFL teams, creating opportunities that they would not have had.

As the season was abruptly ended, it was not able to sustain. Perhaps in another 19 years someone will try again.