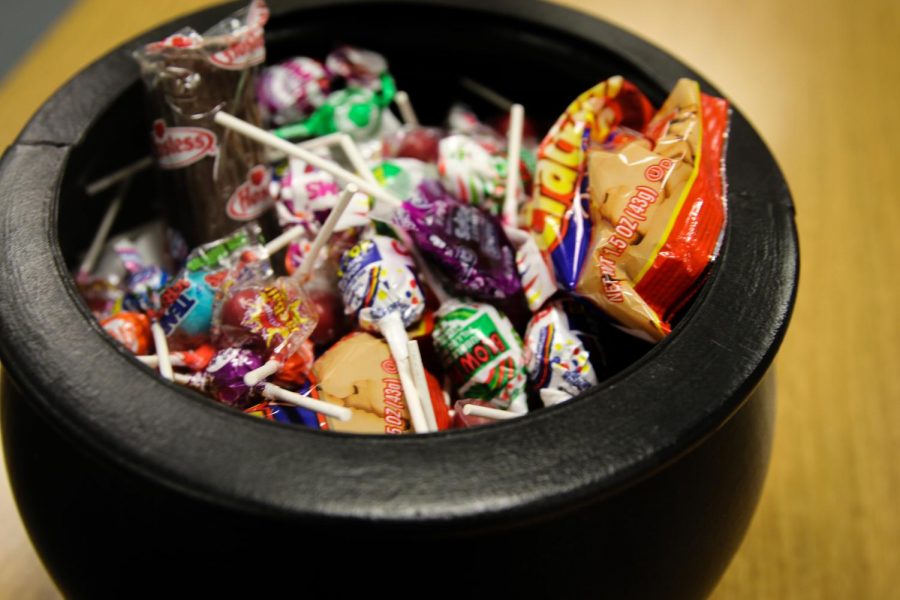 Halloween candy and decorations in stores lead buyers to shop a month before the holiday.

The moment holiday decorations appear in stores, human beings are slaves to the mechanics of capitalism, as a moth to a flame, burning through their paychecks and savings in the process.

Pumpkins, candy, and spooky black and orange decorations line the windows of the stores across the Grand Market Place in preparation for Halloween.

Although stores want to give shoppers a heads up about the upcoming holiday, some people only plan to begin shopping for decorations a few weeks out from the celebration.

However, for those who like to go shopping early in September or the beginning of October, Halloween is only celebrated the last day or week of the month. With that being said, I feel that buying decorations ahead of time could be a waste of time in some situations. For example, obtaining supplies for crafts or buying candy for Oct. 31 and having to hide them away from the kids or yourself but then end up being eaten or forgotten until years later. Believe me, I speak from personal experience, and many people might have found themselves in the same situation once or twice.

My parents would try to purchase trick-or-treating candy a couple of weeks before Halloween and hide it in the pantry. They did this because they knew they wouldn’t have enough time to go shopping for decorations or other festivities during the two weeks leading up to the holiday, which meant candy sneaking opportunities for me and my sisters. Although in this situation where my sisters and I were benefited, my parents were the ones spending double the money for candy since they had to buy more for the children in the neighborhood hopping from house to house looking for something sweet to eat.

I understand that decorations should be put up for craft stores, in order for artistic people to get ahead in preparing their festivities for the holiday, such as pumpkin carving supplies and homemade costumes. However, in a recent survey done by New American Funding, statistics showed that only six percent of consumers planned to shop for Halloween before the start of September. In contrast, the amount of buyers scheduling to go shopping during the first week of October estimate to around 41 percent.

The Balance article about Halloween spending and statistics reported that the total sum of spending last year rounded up to $9 billion dollars, with only around 175 million people contributing to the celebration. Out of the population of people commemorating the holiday, each participating person celebrating contributed around $86 to the total, which is a significant quantity. This just shows how shopping early can cause consumers to buy unnecessary supplies and decorations for Oct. 31.

Overall, I believe that Halloween festivities shouldn’t be put up in stores any earlier than the month before. Although, having display cases filled up a month or two early in stores motivate consumers to get ready for the holiday which is good for business, it can also be detrimental to budgets that some people have for the occasion.