Aftermath of the Freshman Mixer. Where fish flopped on the dance floor and created a whirlpool of excitement. 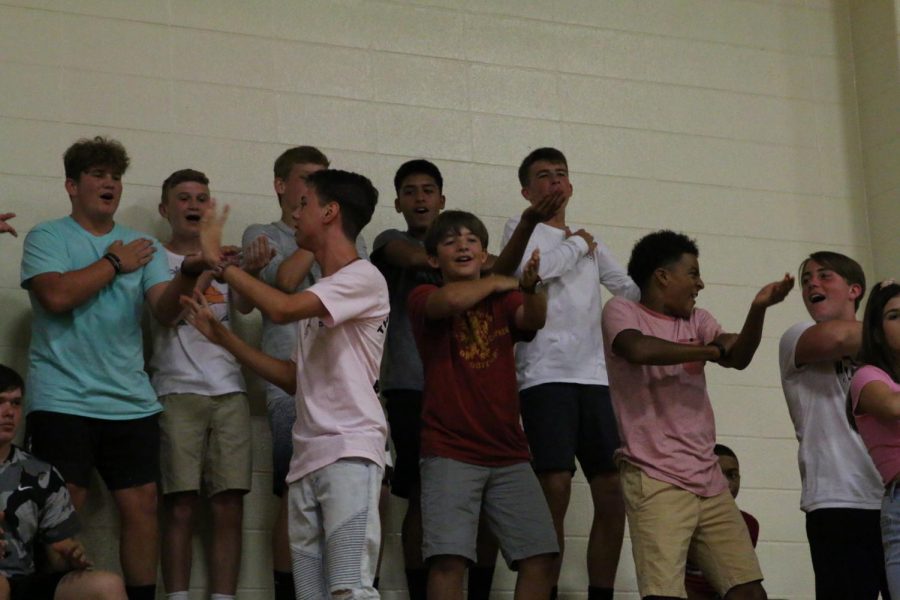 Sailors, black holes and blind homecoming dates invaded the small gym Saturday Aug. 24 during the Freshman Mixer to start the year off with a bang. After the freshmen’s first week of high school, they had an opportunity to get together with their fellow fish to celebrate the week and year to come.

Student Council held the event and was relieved to notice that the gym was being packed with students. In all about 200 students attended, contributing about $945 which is earmarked for the class of 2023. A great start to help the new edition to the school start their successful four years.

The mixer was interactive “[with] games and team building with people you don’t know,” freshman Lillian Nation said.

Ships and Sailors was the name of the first game of the night. As described to the students, it was a giant somewhat complicated game of Simon says. Fish were flopping across the gym floor from side to side, saluting to their captain and most importantly listening to the next instruction.

“It was super interactive [with] random kids who were out of their comfort zones, but I enjoyed the interaction a lot,” freshman Nate Craven said.

The second game was Black Hole. Different groups scattered around the gym. In each group, hands were put together to walk in a circle around a trash can while trying to eliminate each other by pushing each other in the black hole. Of course, without breaking bond and being drifted into “space”.

“[It was] Challenging to stay together and not hit the trash can, but with music and friends it was definitely a good time,”  freshman Gerardo Ceniceros said.

Last, but most certainly not least, Student Council hosted the Dating Game. A random boy and girl got the opportunity to share characteristics of their perfect date. As they were blind folded, the announcer would present date scenarios to the crowd of the opposite gender. If they weren’t the perfect match, then they would sit. Finally whoever was in the running for the perfect date would then come down to share a pick up line helping the damsel in distress find their perfect date. After this process the two winners received free homecoming tickets.

“My friend Bibi Adegbola won and that made her excited. It was also super cool to see her win a free ticket,” freshman Christiana Coker said.

These freshmen are going to be with each other for the next four years, so Student Council wanted these students to make new friends and feel like they are welcomed.

“We do these games to help these students from different middle schools meet new people, and hopefully learn name or two,” Student Council President Dharius Daduya.

The night was a success and it helped that many students were enjoying their time. Energy soared through the room. Freshman Sebastian Watson stuck out that night helping to lead a large crowd of students in what seemed like a directed dance of The Macarena.

“With the amount of people who really wanted to be there, I just felt at home,” Watson said.

Because of this, Watson was able to be his crazy self and make a lasting impact throughout the night.

In the end, the Freshman Mixer celebrated the success of the first week and allowed the freshmen to feel comfortable with their new classmates.