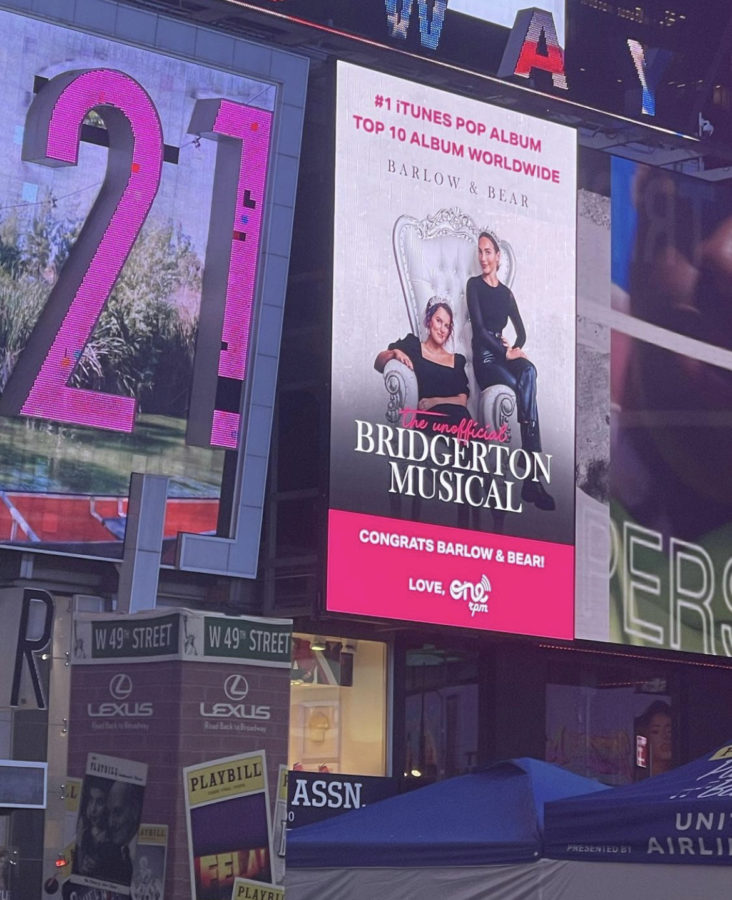 In Times Square, New York the new unofficial Bridgerton Musical created by Abigail Barlow and Emily Bear is displayed on a billboard for all to see.

On Christmas Day in 2020, the show Bridgerton premiered on Netflix. One eight episode season had viewers star-stuck. Two viewers in particular, Abigail Barlow and Emily Bear were completely in awe of the show, and instantly saw a need for the show to be put on stage. Singer- songwriter Barlow got to work and created songs for the concept of Bridgerton the Musical and posted them to TikTok.

Each video gained more and more views, and the idea unfolded more into a reality. Barlow and Bear soon announced a full Bridgerton soundtrack which was released on Sept 10. The soundtrack instantly rose to the top of the charts on streaming platforms, with Bridgerton fans going crazy over the soundtrack. I’m here to discuss the brilliant craft of the musical, and talk about which parts of the soundtrack rise  to the top.

Firstly, I have gone through each song on the soundtrack picking apart my favorite pieces from each, and selecting which songs stand out from the group. The soundtrack kicks off with a strong start with Tis The Season, the opener displaying the idea of getting ready to be married off. The part that stands out is the switch in focus to the two side characters’ (Anthony and Sienna) relationship.

The music picks up on these parts and displays their relationship perfectly through rhythms and notes. The lyrics, “Just hold me closer now, our time is running out,” fit perfectly with Sienna’s character from Bridgerton. Another spectacular part in Tis The Season is Daphne’s graceful walk to the Altar to be presented to this queen. Barlow sums up Daphne’s thoughts of trying to be “perfectly perfect” as the song states. Her light and airy voice represents Daphne’s character very nicely and in a sound-appealing manner.

Moving along to a more memorable portion of the soundtrack, the song Entertain Me is sung by the Queen, an unpleasant lady who constantly seems impossible to please. The most musically memorable part is Barlow’s highly impressive riff in the song. She hits some extremely high and difficult notes leaving listeners in awe.

One extremely moving part of the soundtrack that stood out to me was during Friend turned Foe, a song about two of the main characters heading into a duel with one another. Daphne (the only reasonable one) tries to plead with her brother to tell her where the duel takes place so she can stop it. When he refuses, Daphne, voiced by Creator Abigail Barlow exclaims these powerful lyrics,

This beautiful yet forceful part left me with chills. Daphne’s potent response to being dismissed as a woman stands out heavily in the soundtrack. One iconic song, and perhaps the one that brought the Bridgerton Musical it’s fame in the first place is Burn for You. Every single part of this song is incredible. It goes through the step by step portrayal of Daphne and Simon’s feelings for one another blossoming into a charming love story, all in one song. The Creators’ songwriting talent truly is set apart from the rest in this particular tune, so it is no surprise this song gained its fame.

Lastly the quality of the musical Oceans Away. From the Musical’s TikTok debut, this song has always been my personal favorite. The musical build-up in this piece is remarkable and left me speechless. It shows the two-sided thoughts of the relationship between Daphne and Simon until the buildup of them finally ending up together, leaving the listener satisfied with the outcome.

The Bridgerton Musical is truly a work of art done by Barlow and Bear. Barlow’s singing talent is implausible, and Bear’s songwriting/piano-playing is prodigious. The two artists’ composure conjoined together\makes this unofficial musical so unique and spectacular. Although not all songs were mentioned, each song is an important part of the Bridgerton story. They all do a great job transitioning and moving the story along through their wonderfully crafted rhythms and dynamics.

Overall, the Bridgerton musical deserves the recognition and the views it has received. I believe that every Bridgerton fan should give the soundtrack a listen. Recently, Barlow and Bear were surprised to see a billboard with their unofficial musical cover on it in Times Square, New York. Hopefully, one day the billboard will display the OFFICIAL Bridgerton Musical on Broadway.