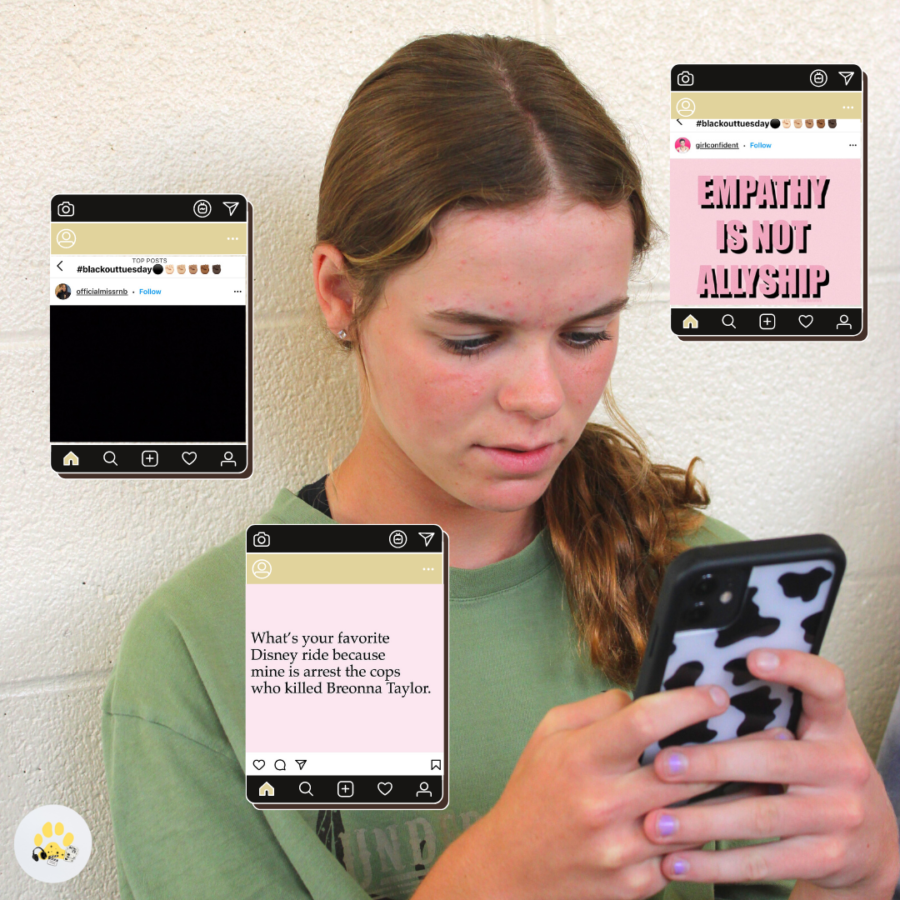 Amidst the strife and tension of racial relations, a new age of social media activism was born…but is this activism genuine?  According to the Wisconsin Union, performative activism is activism done to increase one’s social capital rather than one’s devotion to a cause.

“Why support something when you don’t even know what’s going on or if it’s not even in one’s interest,” senior Kyle Sawit said.

Students who authentically use social media for their causes argue that one’s online image should represent the person’s actual beliefs and actions.

“Posting information that may be wrong on your profile for the sole purpose to “look good” makes the marginalized group/cause struggle to be heard, and also takes the attention away from those fighting for real change”, freshman Marrah Alverson said. “People can be misguided by the things posted and said which could result in a chain of incorrect information and make the situation worse for the people affected.”

And for some, that is exactly what happened. During the height of the Black Lives Matter movement in June 2020, the hashtag “Blackout Tuesday” emerged. Spreading like wildfire, the Instagram trend had people of all ages reposting black squares with the tag regardless of prior knowledge to its message.

“That hashtag was supposed to actually be informational,” senior Zee Atkinson said. “Now it’s just full of people posting black squares. It takes the seriousness and urgency out of the whole movement and makes it seem as just another GenZ trend.”

And while some students agreed with Atkinson in the notion that the hashtag turned valuable movements into lackadaisical black squares, some believed that the Instagram posts were beneficial to the growing movement.

“I think it was extremely helpful. It brought awareness to a very important cause that wouldn’t have gained much awareness otherwise,” senior Hailee Seales said.

And gained awareness it did. Before noon, Tuesday, June 2, 2020 the hashtag had over 14.6 million posts under it according to CNBC, making it one of the most widespread social media campaigns in history. But amidst the two extremes, sophomore Sophia Moran found common ground.

“On one hand, it was a way for people to display their support in massive numbers who may not have been able to support otherwise. On the other hand, it was an incredibly convenient vessel for performative activists to pretend to care about the movement,” Moran said.

Some students even questioned the authenticity of the activism from big corporations and how it affected their socioeconomic status. Nike, for example, temporarily added a new tab on their website to donate to black foundations and has recently released a Historically Black College & University (HBCU) clothing line. Pepsi CO. decided to make some alterations to the iconic Aunt Jemima Syrup, even changing the name of the product line, in light of the pressing circumstances. GameStop chose to silence all social media boosts and advertisements they release for 8 minutes and 46 seconds–the time it took for George Floyd to die under the knee of former Minneapolis police officer, Derek Chauvin.