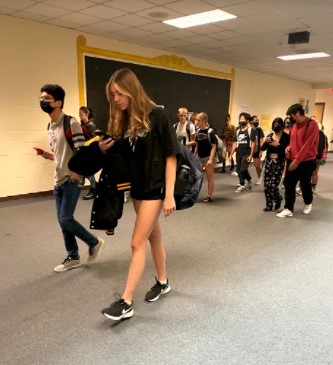 Students are able to use their cell phones during passing period and at lunches. In the classroom though, students are to put phones and earbuds away.

If a student has their cell phone and/or headphones out during class they are able to get automatically written up and sent to their Assistant Principal’s office.  But, this cell phone policy is not new. As for now, this school year teachers and staff members are highly enforcing this policy.

“The cell phone policy that everyone is talking about has always been in effect. In fact we had two sets of posters, the yellow ones that you see now that were put up this year but the ones from years past are the white ones, it is the same cell phone policy,” assistant principal Robert Jordan said.

Factors such as the decline in student’s scores due to last year’s online classes and wanting to create a distraction free environment in the classrooms. Making a reason as to why teachers and staff members initially put this policy out for the students and why they are trying to apply it so much this year.

“We start looking at student’s scores, test scores, and overall academic achievement. We saw that we had some slippage because of students not paying attention in class or perhaps of COVID-19, working online, all of those factors added into this,” Jordan said. “We want to eliminate distractions. We just felt that the cell phone thing was a distraction”.

Even many teachers see the same thing especially since they are on the front line with the students, seeing how cell phones can be a distraction and can be a factor in declining scores.

“I think enforcing the cell phone policy is definitely going to increase learning, and I don’t think there is any question about that,” teacher William Jenkins said.

For the most part it can be said that most students have been compliant with the policy so far.

“The cell phone policy has benefits to our school like creating more involvement and participation when in class and having class discussions, especially allowing students to connect with each other more,” senior Aayan Momin said.

A few teachers have seen a good reaction due to the policy being enforced.

“I would say that students have been following [the cell phone policy]. I mean sometimes in the first 30 seconds they have their phone out after the bell rings but they are very compliant to immediately putting them away,” Jenkins said.

However there is the question, “what about music?” While even the usage of headphones when they are not needed during class is also prohibited, some teachers have allowed this in previous years but have backfired.

“I would let people listen to music but even that was problematic because they weren’t just strict to music it would be wasting time,” teacher Loren Freed said.

In the end though, teachers and staff members are not completely abandoning cell phone usage in the classrooms, there is the chance that teachers involve phones in a lesson.

“A teacher will use any use of technology to work on developing lessons to reach all learners… the teacher’s lesson plan and they have to figure out if using the cell phone is going to promote learning or cause a distraction,” Jordan said.

There have been improvements already in the classrooms since the policy has taken into effect.

“We felt if we address that issue we will see improvement in engaging in classes and we would also have higher grades and also do better on standardized tests and from what we have seen so far is higher levels in engagement,” Jordan said.