Football Star To Touch Down in Alamo Dome 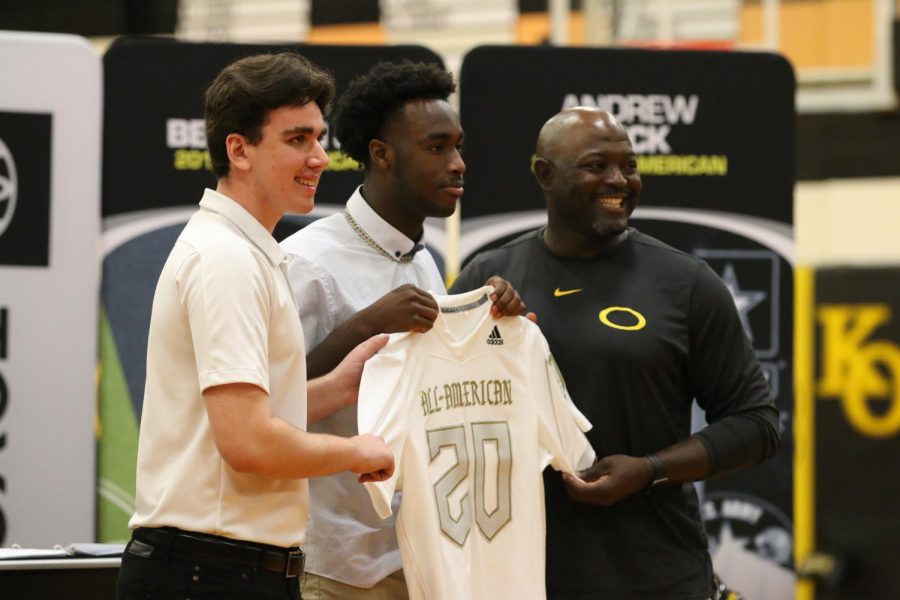 Along with the bowl game representative, senior Dwight McGlothern and Athletic Director and Head Coach Jason Glenn present #20 his jersey for the U.S. Army All-American Bowl game. McGlothern was greeted in pep rally fashion by other athletes to celebrate his selection.

From little league to All-American, senior Dwight McGlothern’s football journey has been nothing short of a perfect example of the utmost hard-work, discipline, and dedication.

Hundreds of McGlothern’s friends, family, coaches and teachers packed the gym yesterday to help celebrate his invitation to play in one of the most highly coveted high school football games in the nation: the U.S. Army All-American Bowl.

McGlothern’s selection labels him as being one of the best young talents in the entire United States.

The 1 p.m. game is scheduled to kick off on Jan. 4, 2020 in San Antonio’s Alamo Dome, and McGlothern will be playing alongside and against the best naturally gifted talent the country. Many have already committed to big name universities like LSU and Alabama.

With all this talent under one dome, not only will the fans be in for some exciting football, but players will get the chance to show off their amazing skills that they’ve had the chance to perfect for so many years, and many will be committing to power-house schools all over the country, including McGlothern.

So far, McGlothern has centered his top five schools to the include the University of Arkansas, Georgia, LSU, Oregon, and Texas. But with Alabama, USC, Oklahoma and Virginia Tech now in the mix, the range of choices for McGlothern has only widened.

McGlothern took a heartfelt moment to use the podium he had at the press conference to give thanks to all the Klein Oak staff ranging from the football coaches to the lunch ladies.

“Thank you to all my teachers, Ms. Debottis, Ms. Garrison… I’d also like to thank Coach Carp and Bradley. I’m not just saying this because I’m up here,” McGlothern said. “It’s all love, all the time.”

McGlothern will continue the season with the Panthers as they advance onto the second round of the playoffs on Saturday, Nov. 23 against Cypress Ranch. Kick off will be at 3 p.m. at the Waller Stadium.