Creating safe environment is priority one for administration, teachers 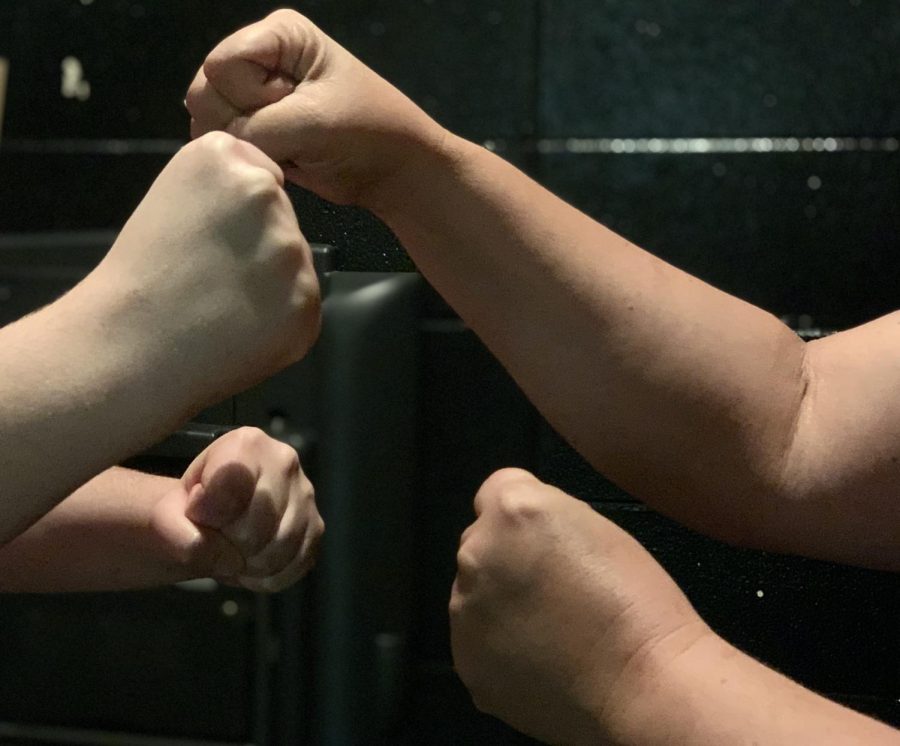 Despite many choosing to fight it out, the Klein Oak administration and staff encourages disagreeing parties to talk it out before punches start flying.

Crowds of students gather in a loose circular formation. They watch with bated breath as adrenaline rushes through their veins, as the hallway commotion will eventually end up on Snapchat, Instagram, or will even be airdropped to multitudes of students. Motives will be discussed, the drama will unfold, and the fight will go down in history.

But what about the consequences?

According to the 2019-2020 KISD High School Student Handbook, fighting, which is defined as physical contact between two or more individuals; any fighting that occurs en-route to or from school, or on school property, could result in an immediate suspension from school, and referral to law enforcement authorities.

Just a few weeks ago, an altercation occurred within the walls of the school. Interest bloomed for the incident because rumors grew of a large group of students fighting during Panther Den.

The administration expressed a view on the incident that is based on the idea of learning from it and becoming better as an administration and a school.

“There were a few students that made some bad choices. They wanted (they chose) to take their anger out in a physical way and other students, friends of theirs, who also make poor choices, and decided not to prevent something that could have been very dangerous to them and everyone else around,” Assistant Principal Jason Anderson said.

According to Anderson, the emphasis should fall on mediation between these incidents and students to prevent altercations from happening in the first place.

“I’m using it, as one of the freshmen administrators, as a teaching tool to show other students, that ‘this is what happens if you don’t let us intervene for you’. I have mediated many situations before with students, and 10 out of  10 times, they have always worked out.”

But when mediation is not an option, large scale fights occur, and affect teachers and the student’s body.

“During the recent event, we heard some commotion in the hall, and I looked, then came back in because there were so many people,” said Annette Jones, who teaches Geometry in room 293 within the 290 hallways, near where the incident occurred. “I didn’t want my classroom emptied to join them, so I came in and I shut the door. We heard the kerfuffle pass our door; we saw the police go past our door. But in the classroom, we were calm.”

Teachers weren’t alone in their assessment of the incident.

“[When it happened] I was just sitting here, and then I just heard all the noise in the background, and then I was like, ‘what the heck’s going on?’ ” senior Emily Thorpe said. “[The teacher] told us to stay in here, so we stayed in here.”

The incident itself may have shown some negative aspects of some students at the school, but the positive within the school shined through quite clearly through the people who make up the heart of the school; the teachers.

“It was uncomfortable when it [the fight] was happening, but because all of the teachers that stepped up and helped out, it calmed down quickly,” Jones said.

One such teacher, geometry teacher Heidi Anderson felt she had a personal stake in the incident.

“I was in my room and I heard a lot of noise and ruckus out in the hallway. I told my kiddos to ‘stay in here’ and I went out in the hallway and noticed there was a big fight; I saw one of my students, from another classroom of mine, that was trying to get involved,” Heidi Anderson said. “So, I tried to get him, and de-escalate the situation.”

The fight had an impact on everyone from students to administrators, but as the leaders of the students and the school, the administrators used this experience to open a dialogue with the students who were involved in hopes of them understanding that physical altercations don’t solve their problems.

“I think [the fight] made us aware that had the students come to us first and told us ‘hey, we’re having this issue’, I believe that we could have sat down and talked about it and mediated that situation, and it would have never happened,” Jason Anderson said.

In the end, Jason Anderson said that the goal of all administrators and teachers is to create and enforce an environment in which all students and adults who enter the campus feel safe and secure, and one in which learning can occur without unneeded distractions.