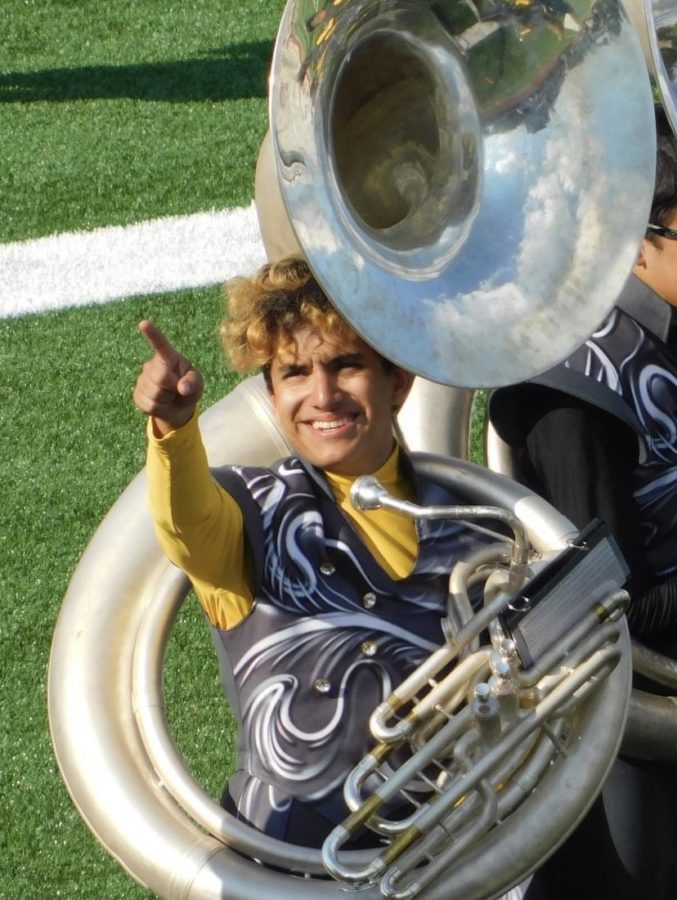 Senior Josiah Vargas, the band president, tuba section leader and former drum major gives a post-performance nod to the audience. Vargas takes his role as a leader to heart. “I just want to be someone people can talk to and look up to,” Vargas said.

The sun beams on the concrete and the yells of orders echo across the field. Everyone sprints to their next position with brass weights in hand, their minds constantly planning their next move. For senior Josiah Vargas, this was an average August evening.

Recently, as the band president, tuba section leader and former drum major, Vargas has become the talk of the band after receiving a contract for The Cavaliers Drum and Bugle Corps in 2022.

“The Cavaliers is one of the top three organizations out of all the DCI groups, so the fact that I get in first try without previous experience, to me, is amazing,” Vargas said. “I was one of four people who were let into the tuba section from across the nation.”

The Cavaliers are a World Class Drum Corps International (DCI) marching band located in Rosemont, Illinois. They are seven-time national champions in DCI and continue to be one of their most prestigious organizations.

“My lesson teacher is one of the staff and he asked if I wanted to audition. Come October, [The Cavaliers] start putting out auditions, and I went to the audition site. Everyone who got a call back goes to a second camp, so I went to Denton for a whole weekend,” Vargas said. “During this time, they evaluate you, how you march, how you act, how you play, represent your school and you as a whole.”

Once Vargas went through the audition processes, he was selected to be part of the tuba section. He begins his journey soon after graduation.

“Around the beginning of June, we have move-ins. I get to fly up to Michigan to Adrian College and live there for a about month doing spring training,” Vargas said. “This is one of those organizations where they march day in and day out, 12 hours a day, every day. It’s 85 days from June to Mid-August.”

Not many people have the determination to work to this extent as Vargas does, for his optimism drives him to his accomplishments. He hopes to continue his association with The Cavaliers for as long as he can.

“I have to re-audition each year, and I can do it until I turn 22. If I can do it for the next four years, then that’d be a lot of experience that I want for my career,” Vargas said.

The Cavaliers is only the beginning of a career Vargas has been striving for.

“Me liking marching band really started in 2019 when we had the DCI Showcase at Klein High School. That was the first time I saw professional marching bands,” Vargas said. “I didn’t know who the teams were or where they were from, but then I saw the Cavaliers and thought it would be cool to do that.”

Not only did high school band inspire Vargas’ passion for marching band, but it also inspired his music passion altogether.

“Around 3rd or 4th grade, Klein Oak’s band came to my elementary school and I told my mom about it. I was going to do band when I got to middle school and I promised her,” Vargas said. “I didn’t know anything about marching band, or if I was going to play Tuba, but I’m glad I did.”

His love for music only continued to grow exponentially from then on, and so has his legacy on the band that will continue to remain after his departure. This is only the beginning of whatever the future may hold for him.

“Hopefully, I could be working for a high school like Mr. Marx. What he’s done for this band over the time he’s been here has been amazing in changing our mindsets, goals and how we see the world around us,” Vargas said. “I want to be able to be that for kids, to shape them into better people.”