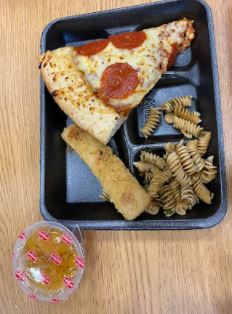 Students take advantage of the new and improved lunch menu.

The lunch menu is expanding this school year with new meals. Already featuring new items, there is still more to come in the upcoming months.

“Lunches this year are going to be different,” cook John Marisol said. “Kids are still getting their free breakfasts and lunches, [but] also have a lot of new menus for the kids.”

The variety of new meals is due to a survey that was taken last year. The cooks wanted to try new things but also wanted to hear from the students.

“We did a survey last year and decided that we wanted to introduce some new foods,” baker Betty Citzen said. “We let the kids give it a try and then got their feedback. This year we decided that we would implement the things they liked.”

A change in the food has also turned the heads of some students that did not get lunch before.

“In the past years I would always bring my lunch, I just couldn’t eat the school’s,” sophomore Emilee Schefer said. “But this year’s options have me switching up my routine.”

Since there is a noticeable difference between the menu last year and this year, more kids are deciding to get the food served at school, making lines longer as well.

“The lunches now appeal to more students who were tired of the same old prepared meals that are repeated weekly with no change,” Schefer said.

As a result, cooks have to work hard and fast to get the meals out as soon as students leave 4th period.

“It is a lot of work for us but we don’t feel that way because we serve our kids,” Marisol said. “We have been serving [what was] last counted as 1,600 students.”

The cooks begin bright and early to prepare these meals everyday.

Having to rush food at lunchtime does not make the cooks cut back on the new recipes for students.

“From that we get here to lunch, services start at 11:30a.m.  and we are grinding to get it out and give y’all the best that we can absolutely give,” Citzen said. “ I don’t do anything halfway.”

Although the staff have to think about a lot of kids  when making the meals, they are always one step ahead.

“We don’t ever run out of food because we do it in a batch,” Marisol said. “We are cooking right now and when the bell rings we put a new set of food again.”

“We will never be out [of food],” Citzen said. “We will always put something out and [substitute] something in place that the kids will like.”

Since there’s an open floor to get your word in on what you might like to see on the menu, some students put in requests for things they liked.

“I would want some different desserts or a greater variety of cookies in the future,” senior Maddie Burch said.

“Wraps would be a great addition to the menu, with turkey or chicken,” Schefer said.

As there are still more items to be added onto the menu in the next upcoming months, these students’ desires have plenty of opportunity to be fulfilled.

“Here in the meal deal area we have fruit snacks and ranchero. Then we have sushi coming this year,” Marisol said.