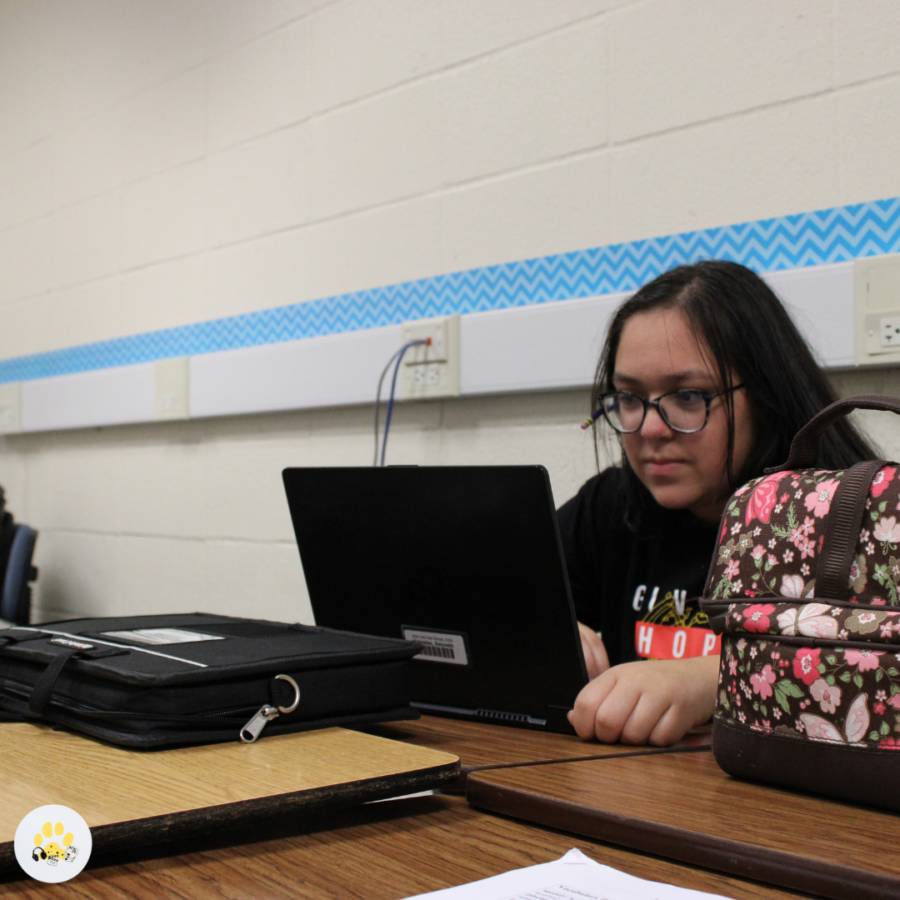 Hard at work, sophomore Gwyneth Gonzalez gets used to student life on campus.

First day of school feelings can range from jittery butterflies, to dizzying anxiety and a sickening dread. These emotions increase tenfold for the students who have not been to school in a year and a half.

For sophomore Gwyneth Gonzalez, who was online for the entirety of her freshman year, the first day of this school year was especially daunting, being her first ever day of in-person high school.

“The hardest part of coming back in person was mostly not knowing where everything was and having to always ask teachers because no one initially told me where things were,” Gonzalez said.

Along with the struggles of getting lost in the physical building, many of last year’s online students feel lost socially as well.

“Online school was definitely harder than in person because the learning experience at home is just so different; you can’t learn the same,”  junior Jaden Gamwo said. “The hardest part about coming back was probably just the social aspect of it and having to almost learn how to socialize again.”

Without a doubt, the strangeness of the 2020-2021 school year has emphasized people’s gratitude in getting back to the education system previously grown accustomed to.

“As an online student for the whole year, I think the hardest thing about coming back was seeing people move on without me, like they’ve re-established groups and were able to grow and make new memories that I wasn’t able to be a part of,”  junior Isidore Espina said. “I felt very alone for a good part of last year and getting back made me realize how much I did need [my friends].”

Although senior Maheen Patel is not technically a new student because she moved to Klein Oak over a year ago, she spent her whole first year online.

“Being new,  I was honestly surprised because Klein Oak is very large compared to my old school,” Patel said. “Being online my first year, I was really lost. I had no friends in any classes, and [Zoom] breakout rooms were so awkward.”

Senior year carries a lot of weight; it is the victory lap after more than a decade of schooling, and expectations are high so coming back added to the stress of the final year.

“I was really nervous for senior year because I’ve barely been on Oak’s campus and thought I would look like a freshman,” Patel said. “Since I was online last year, I was way more focused and dedicated to school because I was in the comfort of my own room. This year feels like I’m always either anxious or ready to be home.”

Taking into account that three quarters of the current student population have never experienced a “normal” year in high school, students are doing their best to re-acclimate after nearly two years of adjusting to the “new normal.”

“I’ve gotten [more] used to being on campus,” Patel said. “But it still feels weird.”