Predictions made for the next decade 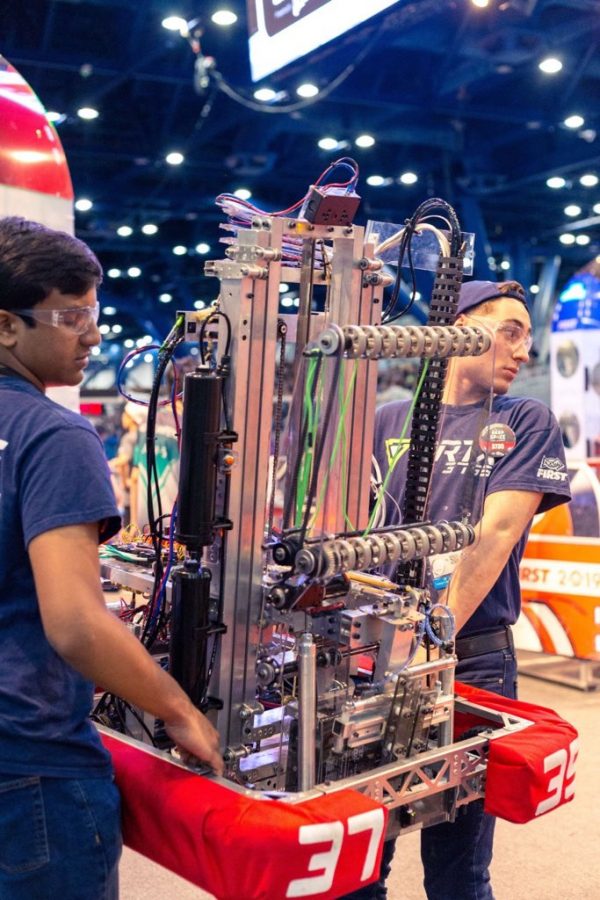 Some predict that advanced robots will play a large part of humanity's future, and Klein ISD's robotics team is making strides towards that purpose. Representing the leaders of the future, Klein Cain student Abhiram Nunna and former Klein Oak senior Brock Darling, carry a hand-built robot from the 2019 Global Robotics Competition at the George R. Brown Center where this technology of tomorrow was seen in the world of today.

The age of tomorrow is one of endless possibilities. A glittering metropolis upon Mars, long awaited flying cars, or a cure for the incurable diseases of today could be hiding just around the corner. Along with . . . shoes?

Predictions for the future can range from serious and somber to random and trivial. When students and faculty try their hand at precognition, the results are just as varied.

“I predict we’re going to have hoverboard shoes,” junior Jax Deleon said. “They’ll be like Heelys but with air pumping out of the bottom of the shoe which allows you to glide. You’ll have a remote control to make it levitate and you will move around by leaning – like on a hoverboard.”

Heelys, popular in the mid 2000s, fell out of pop culture in the last 10 years. These shoes with retractable wheels at the bottom are a fan favorite to come back in the next decade.

“A really tech-ed up version of Heelys is going to return,” junior Brenna Raffels said. “One where you could push a button on the shoe and wheels would come out, but it would be a whole row of them like on rollerblades.”

Along with the return of upgraded versions of 2000s trends, the decades to come could witness the end of current entertainment blockbusters.

“I think that before 2030, the Marvel Cinematic Universe will not be financially stable anymore,” junior Kai Murphy said. “It will end, and they will stop making Marvel movies.”

Predictions for the future of Disney ranged from the loss of certain franchises to world domination.

“Disney and Google are going to form a co-foundation and end up taking over the government,” junior Jessica Rinkle said. “They will run everything.”

The Walt Disney Franchise, accused by the American Prospect of becoming a monopoly, has been steadily buying out their competition the past few years.

In addition to the growing strength of this company, technological creations straight out of sci-fi movies are theorized to gain power within the next century.

“I think robots are going to take over,” history teacher Cory Blake said. “I anticipate we will have personal robots probably within the next 15 to 20 years in the United States and some of them may look like humans.”

The next decade is predicted to go hand in hand with advanced technology. From Back to the Future to Interstellar, film makers have long been equating the two. Following current trends, many think it will be a reality.

“I recently went to a genetic conference and the presenter said 2020 will be the year of STEM cell research,” senior Veena Venod said. “We’re going to have hamburgers made directly from these cells so no cows would have to be killed for it. The technology is already being created now, but going into the next decade, I think it’ll spread.”

Even if predictions for the world of tomorrow fall through – like that of the flying car for the 2000s – thinking ahead itself provides an opportunity for entertainment to the people of today.