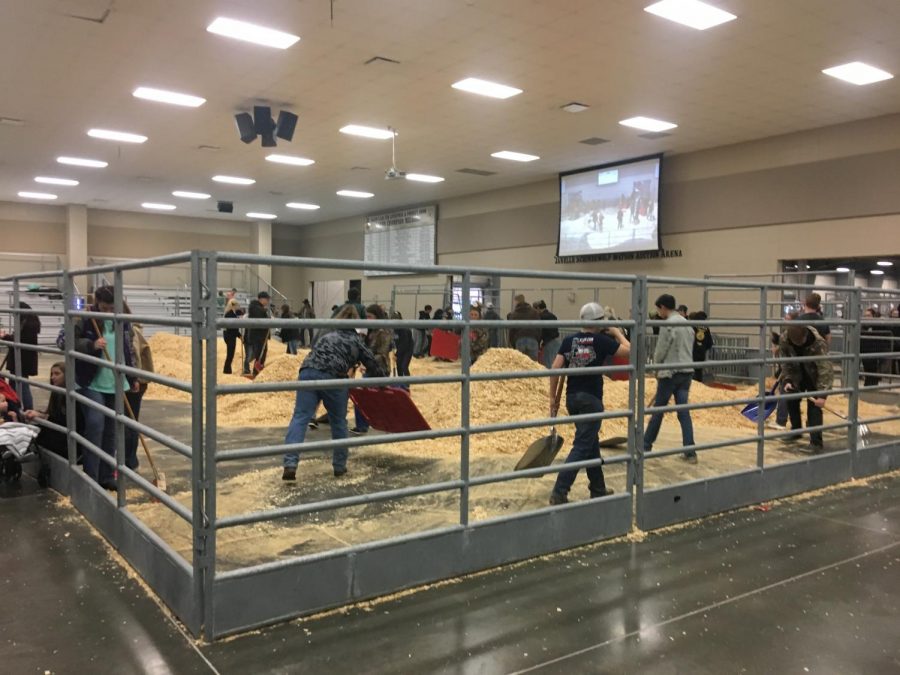 Klein ISD FFA members sweep the arena at the Klein Multipurpose Center to get ready for the live auction on Feb. 9.

With the start of February, Love is in the air, but so is a distinct smell: that of the beginning of rodeo season and the 50th annual Klein ISD Livestock Show.

The yearly show was held at the Klein Multipurpose Center Feb. 6-9. Each day was designated for specific shows such as the Breeding Rabbits Show on Wednesday and the Steers on Friday, saving the last day for the auction.

This year there were more than 430 FFA members representing all five district high schools participating in the event of the year with around 92 exhibitors from Oak.

These students were given the option to raise livestock towards the beginning of the school year such as steers, heifers, lambs, and goats. Students were also able to compete in areas such as horticulture, agriculture mechanics, scientific investigations and floral design.

“I wanted to continue being a part of FFA and floral design was the best class for me to take,” sophomore Grace Hoelscher said. “[To prepare] we have a list of plants species that we study and we go to nurseries to look at them up close and then we memorize the questions. [On show day] you are given a certain amount of materials and you have to make an arrangement out of it.”

FFA members could also raise rabbits, chickens, turkeys or swine. To make auction students must place in the top five in pigs and top two for lambs and goats in their class. A class is a divided section of the type of animal, such as the goats and lambs, are separated by weight and breed.

After all projects had been shown, a drive held for those who ranked high enough to go to auction where Grand Champion and Reserve Champion was announced. Those who went to auction, were guaranteed a buyer and usually get more money than those not in auction.

“Whenever I got first in my class, I couldn’t wipe the smile off my face and whenever I went back for Grand Champion Drive, I went in with the thought process to make my pig look the best as possible,” senior Cassidy Fagan said. “It’s the way to go out with a bang because everyone wants is to win Grand Champion and the fact that I won it makes my senior year amazing.”

Students not able to go to the auction were able to search for buyers during the tent sale that morning of the auction. At the tent sale buyers can walk around the back part of the barn, where the animals stay, and talk to FFA members who are trying to sell their projects for the price of how much work they put into raising them.

“[The students] put in a lot of hard work and hours and when it came to the show,” agriculture teacher Charles James said. “To see them experience both disappointment and joy when they do well is a learning experience and most all of them learn something from it. That’s the most exciting thing. Being able to see the students finally get the end result that they were working for all year.”

On Saturday after all of the horticulture, livestock and floral design shows competed, buyers were able to go around the multipurpose center and either bid on or buy a project. Before the auction there is a buyer luncheon, buyers can range from parents and companies investing in or supporting students in the FFA to annual supporters of the Klein ISD FFA, such as Barnyard Bunnies.

“Our buyers in general are very important to the success of our students and the program and our students’ futures. They can know that their investment is well extended,” Agriculture Teacher Tatiana Richards said. “Their money and their contributions are going to the students furthering their future, their education whether that’s in animal projects or scholarships or to be used for colleges.”