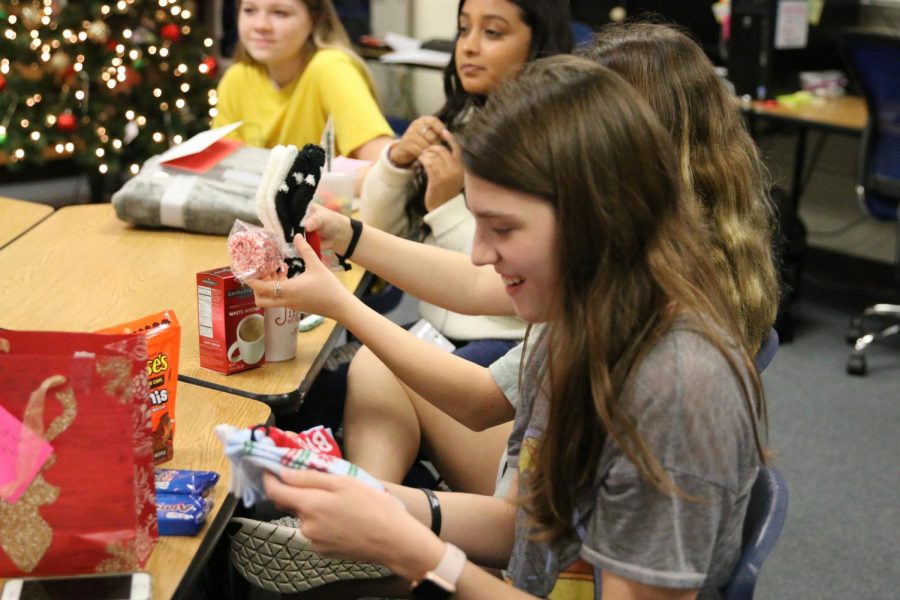 Secret Santa participants are filled with joy while they open the gifts they received.

As Thanksgiving drew quickly to a close, the holiday season hit the ground running. Students are wishing for the hottest holiday gifts.

From the latest Apple devices, to the hottest video game releases, people are setting their sights big for Christmas. Companies such as Apple have recently released new devices around the holidays as they are also planning to win big and take home lots of cash this holiday season. Also, game companies such as Nintendo and Take Two Interactive have also debuted new games to entice consumers to grab their latest games or gaming consoles this holiday season.

One of the most requested devices this season is the new Apple Watch announced in September.

“I want an Apple Watch for Christmas because I don’t have my phone with me all the time and I want to see my texts and notifications when I’m away from it,” senior Aliya Jaramillo said.

Numerous students are after the most recent gaming hardware such as the Nintendo Switch. This system is popular with teens due to its hybrid nature. The system also recently released an online service like Xbox Live and PlayStation Plus that is currently on their competitor’s systems and students are using this as an advantage to get closer to their loved ones that live far away.

“I probably want a Nintendo Switch for Christmas, so I can get closer to my little cousin that I do not get to talk to very much,” freshman Steven Shaffer said.

The Switch can be used on the go or be rested on a dock that can play the same video games on the television. Recent game releases for the device such as Mario Kart 8 Deluxe, Super Smash Brothers Ultimate, Zelda Breath of The Wild and Super Mario Odyssey has made the product enticing for most consumers and families around the nation.

“Super Smash Brothers Ultimate is my favorite Switch game because it’s a super fun game to play with friends because you can bring it on the go and there’s a lot of characters to play as,” senior David Horn said.

Some students are requesting the latest video games such as Red Dead Redemption 2 for the Xbox One and PlayStation 4. According to CNBC, there is a 13.3 percent increase in the video game industry (16.2 billion) and Americans are predicted to spend a whopping $138 billion on video games.

“All I want is Red Dead Redemption 2 for Christmas,” senior Marc Wynne said.

Also, one of the most popular video games on the market is Fortnite by developer Epic Games. This game is available on devices such as Xbox One, PlayStation 4, iOS, Android, PC, Mac and most recently, Nintendo Switch. “I want an Xbox One S for Christmas, so I can play Fortnite with my friends,” freshman Jonathan Boozer said. According to Fortune, the game is making 1.5 million dollars per day just on iOS. In addition, tech news website The Verge revealed that just in the month of April that the gaming sensation has made $300 million in April on all its platforms combined and the number is growing rapidly. Students want in game items and even the latest systems to play it on.

There’s a prominent issue some students want to fix in this Christmas with their little siblings dominating their video game consoles and not letting them play. To remedy this, a few students want a system just for them.

“I want an Xbox One so I don’t have to fight with my little brother to play on the Xbox”, freshman Collin Thompson said.

Comfort is one thing that is important to all students as everyone wants to be comfortable this holiday season. Some students even want the newest clothes that are trending as of now.

“I want Birkenstock shoes for Christmas because they’re comfortable and they go with a lot,” freshman Katie Skinner said.

Over the course of the year, gifts from the past year can break, get damaged, or malfunction and some students want these gifts to be replaced while receiving a marginal upgrade to their past product if possible.

“I want a new iPhone 8 because mine broke,” freshman Sabrina Long said.

Everyone has their favorites in mind for Christmas, but no matter what the gift may be, people want to have the best experience possible this holiday.