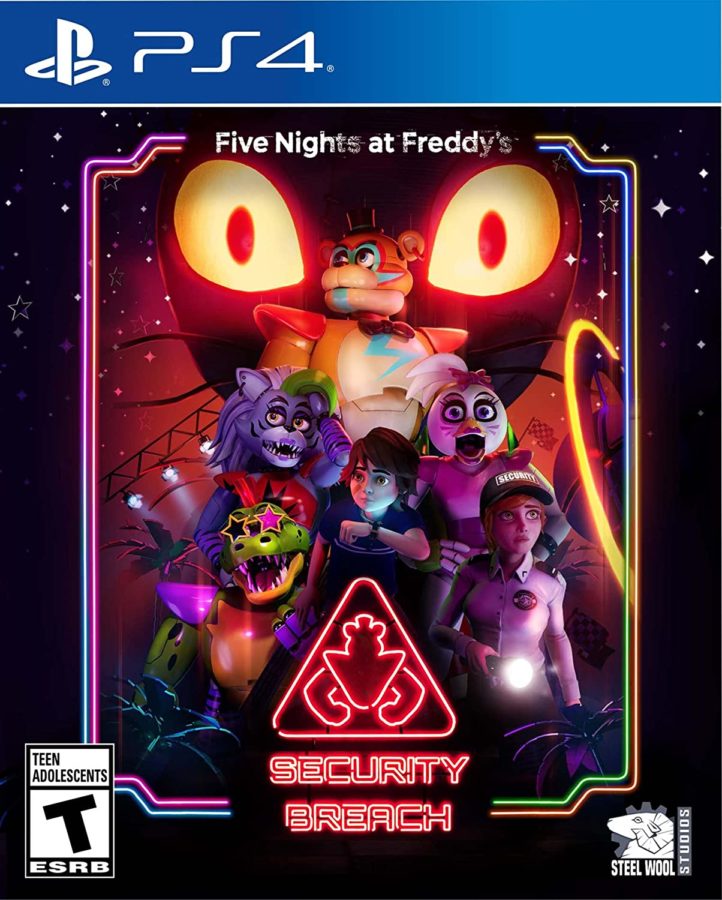 Five Nights at Freddy's: Security Breach (2021) is a survival horror video game developed by Steel Wool. It is currently out on PS5, PS4 and available by PC via Stream

Your biggest nightmare becomes a reality when you are stuck at a Pizza Plex with no escape route until 6 in the morning. The fear of being chased by terrifying killer animatronics through a shopping mall. Five Nights At Freddy Security Breach invites players to enjoy a whole new crew of animatronics called Roxanne Wolf, Montgomery Gator while including fan favorites Freddy Fazzbear, Glam Rock Chica. This is the eighth main storyline game in the pizzeria horror game series. Rather than being tied to a desk monitoring cameras, it allows players to properly roam free.

“I have been playing the Five Nights At Freddy series since Sister Location released back in 2016,” junior Ashley Stein said. “It is an interesting concept how the game wants you to explore to find the secrets laid behind Pizza Plex. Even if you are just inside one building, there so much to explore.”

Security Breach is a first-person survival horror game in which players take the role as a kid named Gregory who is stuck inside Pizza Plex and needs to survive while being chased by killer animatronics until morning. During Gregory’s survival adventure, players uncover the truth about the freaky animatronics who are programmed by the owner to hunt down intruders.  However, compared to the FNAF previous games, players are helped by Freddy himself. Freddy has been a main death bot in past games.

“When Five Nights At Freddy first released in 2014, it was a different type of horror game series,” junior Cooper Cannon said. “Instead of running and walking around trying to hide from the monsters, FNAF animatronics came to attack the security guard instead which for me was unique. When Security Breach launched allowing for players to run around the building, it lost its unique purpose of standing out of the rest of the different type of horror games.”

Gregory, the game protagonist is able to access security cameras in the building to help players throughout the different levels to plan out escape routes to help them survive until six in the morning. Five Nights At Freddy’s: Security Breach is out now on PS5, PS4 and available by PC via Stream.