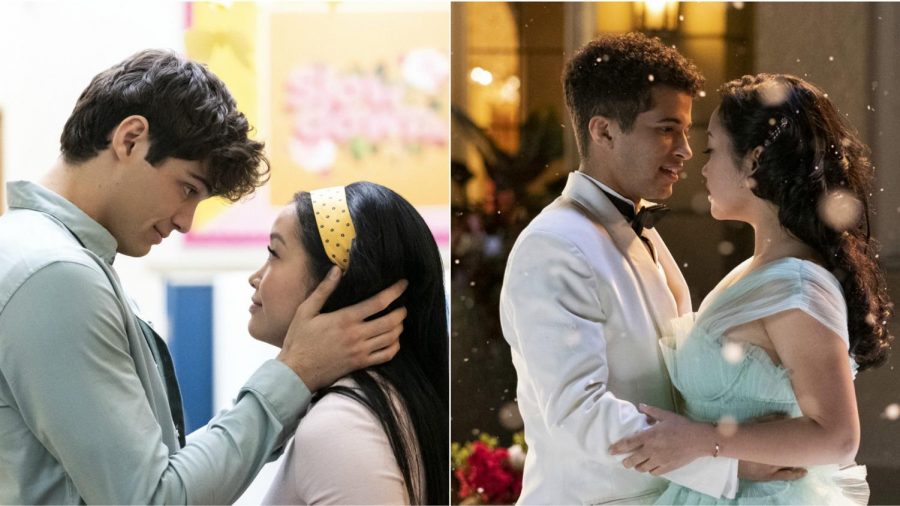 The movie starts with the beloved couple, Laura Jean played by Lana Condor, and the striking Peter Kavinsky played by Noah Centineo. To the fan’s delight, the couple is no longer pretending to date. The peak of their relationship in the movie according to many of the fans is Peter and Laura Jean’s romantic date at the carnival.

“To All The Boys I’ve Loved Before PS: I Still Love You” takes a deeper look into the life of Laura Jean’s single father, Mr. Covey.  After the tragic loss of his beloved wife, Mr. Covey (John Corbett) feels closer to her while celebrating Korean New Year. He has the girls dress up in traditional Korean dresses, and starts to tear up because it reminds him of his wife. It was a beautiful and heart-felt scene for viewers.

Later on, Laura Jean receives an unexpected letter from John Ambrose (Jordan Fisher). In “To All The Boys I’ve Loved Before,” Kitty (Laura Jean’s sister)  sends out all of the love letters Laura Jean had written, and John Ambrose never wrote back, so Laura Jean assumed it had been lost. Unfortunately, for Team Peter fans, it was not lost. From this, the rivalry arose between Team Peter, and Team John.

“I hate Peter. He is toxic, and I like John a lot better,”  freshman Team John fan Natalia Vasquez said.

As soon as John came into the picture Peter became really jealous, and began to do irrational things.

“Peter left her life just because this other guy walked in, and he got really jealous and started talking to another girl. So it was just a really bad movie,” Vasquez said.

Some strong Team Peter fans seem to have something to say about John. They believe that Peter was always the one meant for Laura Jean despite their issues.

“Obviously, Team Peter – Laura Jean and Peter actually have to work towards having a good relationship, which is important,” freshman Avery Miles said.

Miles said John and Laura Jeans’ connection was nothing.

“There was never really a relationship there. It was just based on what they remember of each other,” Miles said.

Laura Jean constantly switches back and forth between Peter and John, trying to find out which one she truly has feelings for. Choosing only one seems nearly impossible for Laura Jean, and ends up upsetting many fans.

Even though the ending of the movie disappointed many viewers, director Micheal Fimognari well executed the rivalry between Team John vs Team Peter. For the fans that were left unsatisfied with the results of the movie, do not fret! It has been confirmed that there will be a third addition to round out the trilogy, “To all the Boys I’ve Loved Before, Always and Forever.”