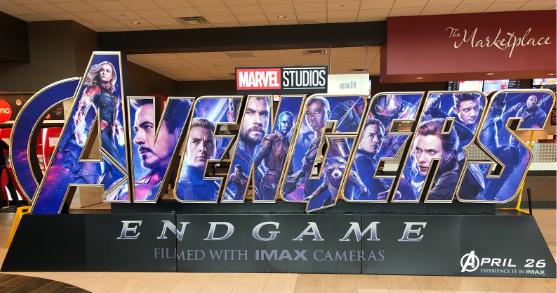 On opening weekend, the 3D advertisement for Endgame was the main attraction in the lobby.

With Marvel finally wrapping up the ends to their decade-long story told over 22 movies, this three-hour cinematic masterpiece called Avengers: Endgame is, at the very least to say, a need-to-see movie.

From the beginning of this new universe, it was already known by fans that this movie would be the one that tops the cake. This is the last time, at least for now, that Iron Man, Captain America, Thor, Hulk, Black Widow, and Hawkeye [the original six Avengers] unite together in theaters.

Endgame picks up where our now broken heros were left off at the end of Infinity War, to give it their last shot at defeating Thanos, the Avengers villian. This being their toughest stride for a victory, they must come with an ingenious plan to bring back the people who were dusted and bring Thanos to justice.

This film, produced by Kevin Feige, distributed by Walt Disney Studio Motion Pictures, and directed by Anthony and Joseph Russo, returns characters from every movie leading up to Endgame, and shows multiple references from the past movies in this fan-loved franchise.

While the story had left off with the few main characters left scattered across the galaxy from each other, they struggle to get back together to figure out how to avenge the fallen. With many scenes that go from tear-jerking, light-hearted, to straight-up action, all the eyes that filled the theater were glued to the screen.

The film already surpassed its expected success for opening weekend by hauling in more than $1.2 billion globally and $350 million in North America alone in box offices. This broke the previous record set by the last movie, Infinity War. In the flurry of opinions going around most of it is positive coming from almost every person who has seen the movie already.

As sad as it is, we are losing some of the major Avengers; we are not alone mourning the lost. The cast themselves, on social media and at the premiere, were reminiscing in the good times they’d had together over the last decade. In response to the casts posts, the fans have took it upon themselves to start trending the hashtag ‘ThankYouAvengers’. This is usually added to a fans post with them thanking the cast for the past decade of loveable cinematic stories and their own personal attachment to them.

The way screenplay writers, Christopher Markus and Stephen McFeely, planned and executed this absolute masterpiece was a very pleasing way to tie the Marvel Cinematic Universe [MCU] in a nice bow for some characters. While they did this, they also left some lose ends for characters to grow from this movie to either branch off into other movies or television shows of their own.

With the amount of story that was needed to go in to this the Russo brothers [the directors] and screenplay writers had to work close together to make sure everything is perfect, as well as getting the cast to not spoil this amazing motion picture. The directors went as far as not giving the full script to Tom Holland, who plays Spiderman. The Russo brothers knew from his accidental Infinity War spoilers that he could not be trusted with anything more than just his own lines.

Despite the fan theoriests trying to predict the outcome of Endgame, their guesses did not compare to the actual film. The thought out screenplay along with the solid work from Robert Downey Jr., Chris Evans, Mark Ruffalo, Chris Hemsworth, Scarlett Johansson, Jeremy Renner, and the rest of the MCU cast was far better than any of the fans could have ever expected.