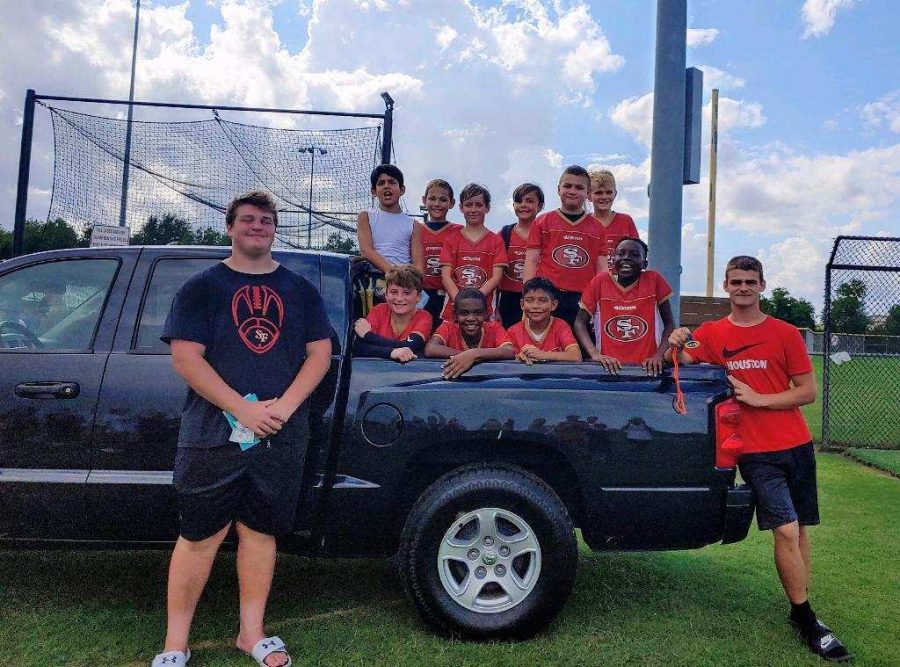 Money, candy, or a pretty card are simple yet kind ways of saying thank you to someone, but how about giving them a truck? Recently little league football players gave their coach, junior Max Roberts, a Dodge 2007 Dakota truck to say thank you for his work to them.

Juniors Roberts and Nolan Steeples are the head and assistant coaches to the 49ers in the Farm League.

To thank Roberts for his work with the kids, one of the players parents, Joshua San Miguel, wanted to get Roberts something to say thank you. San Miguel was able to get the help of another parent, Herald Doyle. Together they planned for a month to get Roberts something special. Word had gotten around that a car, or better yet a truck, would be a dream come true for him.

Finally, Sept. 21, it was time to unveil the surprise. After a game, the kids were having snack while also talking about the game with their coach. Roberts said Steeples began freaking out and because of that he then realized the truck parked in the parking lot was now to be his.

“I was speechless. I really couldn’t understand and value what they really were doing for me,” Roberts said.

Steeples said as the assistant coach he was able to help contribute greatly to getting this truck for Roberts. He helped present the truck in a comical way by using a quote from the movie Facing the Giants.

“I’m the assistant coach; I should at least get a Moped outta this,” Steeples joked.

Everyone was able to be there to help present the hardworking coach with his new truck, and Steeples even received $300 dollars from the parents as well. According to San Miguel the reason these coaches got such deserving gifts was because of the way they worked with the kids.

Since the kids play flag football, Roberts and Steeples work the players hard on specific drills. They like to have the kids focus on which flag to pull, passing the ball, how to run the ball and the overall basics to playing football well. Being in the athletic stance is one lesson they want all their players to learn and be ready for anything the opposing team brings.

Besides teaching these kids how to play football, he wants to teach them how to power through, commit and to be the best they can be.

“I feel like I mentor the kids more than I coach them,” he said.

For two years Roberts has been with this team, and he said the bonds have definitely become more evident.

Steeples, the assistant coach, plays just as big as a part as Roberts does. Steeples works on the offense and chooses the plays while Roberts is more of the enthusiast who gets the kids pumped up and corrects techniques. The coaches have worked well together for three seasons now.

“We don’t try to step over one another; we don’t ever argue,” Steeples said.

Watching the two coaches work together has helped lead the players to success and has shown them what it means to work together.